A Dream for Paraplegic Patients: Life on Equal Terms

For nearly 60 years, MS-Graessner GmbH & Co. KG has been manufacturing high precision Gleason bevel gears and bevel gear boxes for various applications. Modern technology and traditional values combine to deliver the best possible solution to our customers worldwide, wherever high precision and smooth running is needed in robotics, automation or for machine tools. The most recent example of this successful system partnership is the ReWalk

For a long time, paraplegia has inevitably meant life in a wheelchair. Stairs present an insurmountable obstacle; objects above waist-height remain out of reach. The ReWalk changes everything: a computer controlled exoskeleton holds the patient upright, retains their hand, arm and shoulder functions and enables them to move independently. They can stand and walk upright and even climb stairs! The ReWalk-System offers not only the possibility of independence but a whole new lease of life!

Advanced engineering technology for extremely smooth running. The ReWalk is an example of human-machine technology which actively involves the user. It consists of a portable support system with drive motors integrated on the joints, a wide variety of motion sensors, a computer system for the control and safety algorithms, as well as powerful batteries. MS-Graessner has worked closely with the foreign manufacturer to develop the specially designed bevel gears and now acts as a supplier. Alongside the willingness to manufacture even the smallest part orders to meet customer needs, one of the most important ingredients of this successful cooperation was the ReWalk's smooth running. After all, it’s important to guarantee that noise is kept to an absolute minimum during movement. In total, four sets of gears control the movement, two on the hips and two on the knees. 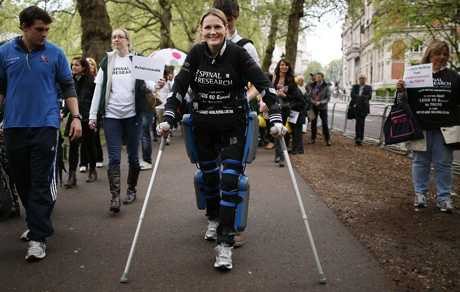 The road to independence measures exactly 42,195 meters. The full extent of the ReWalk’s potential was shown in May 2012 when a paraplegic woman used it to successfully complete the London marathon. It took 16 days, but she crossed the finish line on her own two feet. 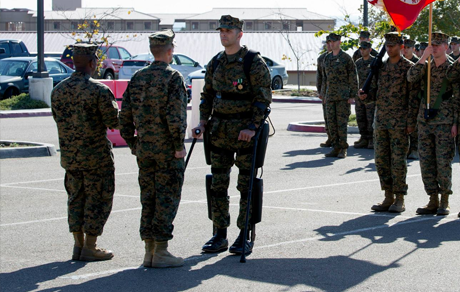 U.S. Marine Capt. Derek Herrera, 1st Marine Special Operations Battalion, is awarded the Bronze Star and the Navy Commendation Medal aboard MCB Camp Pendleton, CA, on November 21, 2014. Capt. Derek Herrera was paralyzed on June 14, 2012, while conducting combat operations in Helmand Province, Afghanistan. As part of his recovery, Capt. Herrera was able to walk again with the help of ReWalk.